We know that data visualization is versatile, that it can be harnessed and used in a wide variety of different ways. Perhaps, however, we never recognized truly how agile and adaptable the format really is.

The examples listed below outline some of the ways visualizers are really pushing the envelope with their work, and also reinforces just how powerful visualizations can be.

For a visualization to tackle such a contentious subject as the debate surrounding religious headwear is a brave move. Religious headwear – whether it is a Sikh turban, an Islamic hijab or a Jewish yarmulke – carries immense cultural and religious significance for millions of people around the world, and so any sort of visual treatment must be appropriately sensitive and subtle.

Danish data visualizer Peter ?rntoft succeeded on both counts with his work on social attitudes in Denmark. At a time when religious anxiety and social concern regarding multiculturalism was at a peak in Europe, ?rntoft decided to represent this in the form of several charts.

The charts represented Danish attitudes towards different pieces of religious headwear. However, rather than simply use a straightforward chart, ?rntoft elected to forge a more direct connection with the subject matter. Utilizing different colored pieces of fabric, the visualizer created headwear pieces with colored segments representing the different data values. These pieces were then photographed along with the models wearing them.

This physical approach – i.e. using physical materials as opposed to digital trickery – forces the content user to engage directly with the issue. With a topic as emotive and resonant as this one, this sort of direct engagement is vital.

It is a familiar story in many Western countries: exercise take-up rates are on the slide while childhood obesity rates are going up. In 1979, 11% of Canadian children aged between two and 17 years old were considered overweight or obese; by 2004 this figure was 26%. In 2013 it was calculated that – if trends continue as they are – 70% of Canadian forty year-olds will be overweight or obese by 2040.

It is obvious that something must be done, and campaigns such as Active for Life are working hard to get kids exercising and to raise awareness of the need for change in Canadian schools. One of the methods they have employed as part of their campaign is data visualization.

Active for Life’s visualization demonstrates the facts and figures surrounding obesity in school. Using standard line graphs, pie charts and the straight representation of percentages, the visuals get their message across. But these are not run of the mill images; instead Active for Life used posed images of actual Canadian school children to form the components of their graphs.

The effect that this creates is powerful. When parents look upon these images, they don’t see models but their own children staring back at them, and the fragile state of public health; when educators and administrators see them, they see their own schools and institutions. A very personal narrative is formed; something which is necessary if such wholesale lifestyle changes are to be ushered in.

When it comes to large public events, they don’t get much more logistically difficult than a marathon. Modern marathons bring together tens of thousands of people, each with the same goal; to complete the 26 mile course in as short a time as possible.

Every October, the streets of Chicago are closed down for a few hours as 40,000 runners pound the city’s tarmac. This annual event turns Illinois’s biggest city into a sporting amphitheater, with millions of runners and spectators lining the streets. In order to keep participants and observers safe, the teams in charge have got their work cut out.

It is a team from Northwestern University who are in charge of the vast amounts of data churned out by an event like this one. They combine geographical information, runner density at various points, leader times, climatic conditions and the status of each medical tent along the course, creating a vast data visualization which unfolds in real time.

As technology becomes increasingly capable, we can expect to see more of this grand scale, real time visualization, helping us to stay on top of events as they unfold.

Our old friend Peter ?rntoft is back, this time in conjunction with the University of Copenhagen as he examines anxieties surrounding disease and illness in his native Denmark. ?rntoft and the team created their visuals following the global H1N1 outbreak, examining the panic and confusion caused by such an epidemic.

Ever the innovator, ?rntoft decided to shun traditional charts and graphs in favor of something a little more visceral. He began by asking questions: do you think the Danish healthcare system is equipped to handle an outbreak on this scale? Then he added the visual element.

He and his team of university experts grew cultures in petri dishes, and used the vibrant coloration of these organisms to tell a unique story. Once again, ?rntoft had succeeded in creating a visual which permeates the artifice and pretence and instead gets right to the heart of the matter, connecting directly with the data itself.

Where Are Ü Now?

It’s not often that we hear Justin Bieber’s name mentioned alongside data visualization, and I understand that there may be a few of you who resent me for bringing the Canadian megastar into the conversation. However, Jack Ü’s 2015 single Where Are Ü Now?, featuring Bieber, threw up a very interesting visualization which we just cannot ignore. 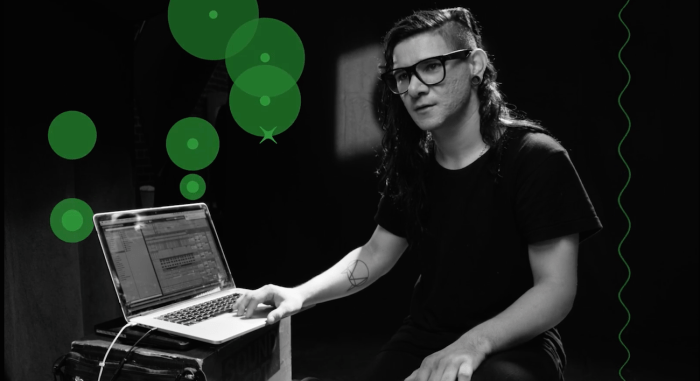 In an interview with the New York Times, Sonny Moore aka Skrillex – one half of the Jack Ü production duo – outlined the techniques, tricks and studio wizardry that go into creating such a hit. Never ones to shy away from a striking visualization, the NYT placed layers of visuals over the top of the video interview, creating a sort of interactive guide to modern EDM production. Whatever your opinion on this style of music, on Bieber or on Skrillex himself, this is an innovative piece of visualization from the New York Times.